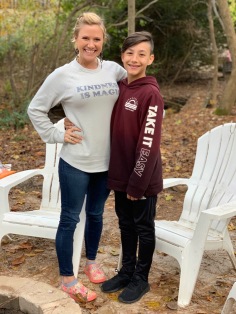 I was asked a few years ago by a dear friend to come along side her son while he came into the older elementary ages and into middle school. To just be another voice and another person he could talk to about anything and everything. Also just to have fun and be there for him. Doing life side by side with kids is one of the greatest privileges in this world. I was honored to take on the opportunity. What surprised me was how much I have learned from doing this!!

The next generation is truly amazing! They are doing more, juggling more, and being expected of more than any other generation behind them. They are incredible when you think about all that they are managing and fighting against. As an older sister to three brothers I was even more thrilled to get to do this. A few times a year I would get to be out of the pink tutu’s and ballet bars that my life revolved around. I didn’t have kids yet and having the opportunity to go to an arcade and to ride go carts was a no brainer! I was going to be there.

When I was young, I had three individuals in particular that came around me and encouraged me. They took me places, they showed up for me, and they took an interest in what was going on in my world. I knew first hand what that influence had in my life. It meant the world that I mattered to them and that they really wanted to see me succeed. They were “super cool”  and to know that they had my back really shaped me.

“Show me a successful individual and I’ll show you someone who had real positive influences in his or her life. I don’t care what you do for a living—if you do it well I’m sure there was someone cheering you on or showing the way. A mentor.” — Denzel Washington

Contribution has one of the largest upshot in all of life. It is when you are contributing to a greater cause or a greater idea that you are pouring out rather than taking. Consuming money, space, time, and negativity helps no one and lest of all you. When you are nervous to go for it, remember, contribute verses consume. Building your legacy is not about buildings, or money, or empires, or even influence. Its about people. So which one is it for you? Some of us think we are contributing but in actuality all we are doing is consuming.

Many of us can come up with incredible ideas but it takes a multitude of people to spread something exceptional. It takes a village to raise a child, it takes a mob to create a movement, and it takes a congregation to have a revival.

Look at the very gospel of Jesus as an example. Become part of something bigger than yourself. Go mentor, and go be mentored! Who do you need to come along side today?

Having gifts that differ according to the grace given to us, let us use them: if prophecy, in proportion to our faith; if service, in our serving; the one who teaches, in his teaching; the one who exhorts, in his exhortation; the one who contributes, in generosity; the one who leads, with zeal; the one who does acts of mercy, with cheerfulness. Romans 12: 6-8